As refinements in the design of conventional digital-to-analog (D/A) converters have narrowed the gap between actual performance and theoretical ideal, equipment manufacturers have increasingly sought unconventional means of expanding the performance envelope and, not coincidentally, differentiating their products from the competition. The resulting converter systems usually contain special digital signal-processing (DSP) functions that are intended to overcome some limitation of the standard 16-bit, 44.1-kHz digital audio signals delivered on compact discs. Denon’s entry into this race is called Alpha Processing, which first appeared in the company’s ultra-high-end DA-S1/DP-S1 dual-chassis CD transport/decoder. It is now available separately at much lower cost in the DA-500, a multi-input, stand-alone digital-to-analog converter.

"Alpha" is an acronym for Adaptive | Line Pattern Harmonized Algorithm. Denon says the system corrects the 8 shapes of low-level waveforms by using high-speed interpolation between e recorded data points to "recreate the data below the LSB (least-significant bit) lost upon recording to provide smooth waveform reproduction." It works by making, sample by sample, what amounts to an educated guess as to what the bits below the LSB would have been had they been recorded, based on stored databases of various possible interpolations ("line patterns"). The method chosen varies constantly, adapting to the characteristics of the input signal.

Literature for the Alpha process has dramatic before-and-after photos showing how the squared-off appearance of a -90-dB sine wave is transformed to the familiar smooth up-and-down sine pattern. There are problems with all such photos, since they illustrate a distortion that does not occur in real-world signals recorded with proper dithering, but I confirmed by oscilloscope observation that such action does indeed occur on low-level undithered test tones.

The DA-500 is very easy to hook up and use. It has five inputs, three of them standard optical (Toslink) connectors and two standard coaxial (phono) connectors. The line-level analog outputs come from a pair of phono jacks. You switch among the inputs with five front-panel pushbuttons. A sixth button inverts the phase, or polarity, of the analog outputs (it made no audible difference with any music I played through the device). The selected digital input signal is also made available at the unit’s two digital outputs, one optical and one coaxial driven in parallel, which offers a roundabout way of converting between coaxial and optical digital signals by feeding into the DA-500 in one mode and feeding out from it in the other. No cables are supplied.

The sampling rate of the selected signal is shown by small LED’s on the front panel indicating 32, 44.1, or 48 kHz. For testing I used the standard 44.1-kHz CD sampling rate. I also used the optical inputs to reduce the possibility of picking up hum or other interference, though it turned out that the DA-500’s very low inherent hum level was unaffected by the choice of input.

As you can see from the tabulated data, the DA-500 stood up very well under the conventional array of D/A tests. The similarity of its normal and de-emphasized frequency responses, its signal-to-noise ratio (S/N), and its channel separation are particularly noteworthy. I would have expected a system that is supposed to give superior low-level performance to have slightly better measured linearity at the bottom of its range, however. The output was low by more than 0.5 dB from -88 to -102 dB and by more than 1 dB from -90 to -98 dB. Still, those are niggling discrepancies, inaudible as such and no reason for concern except to the truly obsessive. Although the DA-500 uses 20-bit filters and D/A chips — in part, presumably, to accommodate the 20-bit output of its own Alpha processing — it will not correctly reproduce digital inputs of greater than 16-bit resolution: A 20-bit signal fed into it comes out with more distortion than a 16-bit signal. This behavior is common and not a problem unless you have access to true greater-than-16-bit signals (very rare outside of recording studios — CD’s, for example, carry only 16-bit data).

The DA-500 also performed very well in one of our unconventional tests — reproduction of "shaped dither" such as forms the background noise of many CD’s made from 20-bit master tapes through special 16-bit down-conversion processes. This is a very difficult test, since it requires both good low-level linearity and extremely low background noise from the converter proper as well as from the following analog output stages. The graph at right shows, in the solid line, the output of a theoretically perfect 16-bit D/A converter reproducing this signal (note how low the levels actually are) and, in the dashed line, the DA-500’s performance, which was very good even though it didn’t quite make it to theoretical perfection in the crucial 3-to 4-kHz region. A device with true 20-bit performance on this test signal would produce a result much closer to the theoretical limit.

In another of our tests, however, the DA-500 exhibited some peculiarities. Denon had thoughtfully provided me with a copy of its fascinating and useful three-disc set of test CD’s (PG-6013/15). The tracks I found most useful were Nos. 57 and 58 on Disc 1 (PG-6013), which contain a very low-level 1-kHz sine wave superimposed on a very high-level infrasonic "carrier" (0.05 Hz in this case). The carrier serves to sweep the 1-kHz sine wave completely through the converter’s output-level range, testing its linearity not only at the crucial zero-crossing point, where conventional linearity tests are made, but near its full positive and negative voltage outputs as well as at all points in between. It’s easy to measure total harmonic distortion plus noise (THD+N) as the signal level swings slowly through the converter’s output range.

But I couldn’t calculate a distortion figure representing theoretically perfect behavior for these signals without more information about their characteristics (specifically, how their dither was generated). So, inspired by Denon’s disc, I wrote a computer program to generate my own similar test signal, whose dither characteristics I knew exactly. Theoretical perfection with my test tone is approximately 21 percent THD+N (it’s so high because my -80-dB 1-kHz signal is so close to its own noise floor). A couple of other D/A converters I had lying around did produce figures around 21 percent as the signal ramped through their output ranges, as did the DA-500 near the zero crossings. But away from the zero crossings the DA-500’s THD+N rose rapidly, and as the test signal approached full positive or full negative output the readings exceeded 90 percent. I got similar results with the original Denon test tracks as well.

Startled by this finding, I listened to the DA-500’s output in this test and found that the rise was not so much in distortion (though some was present) as in wideband noise level as the converter’s output waveform approached full positive or negative excursion. This audible impression was confirmed by spectrum analysis. I tried increasing the frequency of the carrier to 16.5 Hz to see whether the noise was present with more music-like signals. It was. The noise level pulsated along with the 16.5-Hz tone in a noise-modulation effect. The noise modulation also occurred when the low-frequency carrier alone was present, and it showed up in plots of THD vs. frequency as an otherwise mysterious rise in distortion at very low frequencies.

It is not clear from Denon’s description of the system whether this noise modulation was caused by the Alpha processing, though it may be a side effect. Our findings should therefore be taken as representative only of the DA-500, not of other products containing Alpha processing that we have not tested in the same way. The noise did occur, however, in identical fashion with both of the two early-production samples of the DA-500 we had for testing.

The DA-500’s noise modulation was quite unlike other oddities of D/A converter behavior I’ve encountered, which have occurred either at ultrasonic frequencies, and therefore have been inaudible almost by definition, or turned up only at extremely low levels, where the inherent noise of most recordings would mask it. The DA-500’s noise modulation was audible at reasonable listening levels as a faint gritty noise when reproducing sine waves at high levels (between 0 and -12 dB) and low frequencies (around 40 Hz or lower).

It might be argued that such signals, devoid of higher-frequency components that would mask the added noise, are rare in music, as indeed they are, but they cannot be ruled out altogether. Music synthesizers can easily generate such tones, and the lowest audible tone I tried (16.5 Hz) was selected because it’s approximately the lowest frequency generated by a very large pipe organ. It is possible that more complex recorded sounds might also elicit audible noise modulation from the DA-500 if the spectra of those sounds left an "unmasked" region at the frequencies where the ear can most easily detect such noise (3 to 4 kHz).

Yet it must be said that in all my use of the DA-500 with typical music signals I did not encounter a single instance where the noise modulation was audible as such. In fact, with none of the music I tried, even organ music, was there any audible difference between the DA-500 and several other D/A converters we had on hand, once their playback levels were matched (the DA-500’s output is about 1.3 dB louder than a conventional 2-volt CD-player output, a slight but noticeable difference).

In short, despite our considerable reservations about the measurable noise modulation, the Denon DA-500 sounded just fine with all of the many music recordings we threw at it. In addition, it is extremely versatile in its hookup and switching capabilities at a fraction of the price of some competing products. 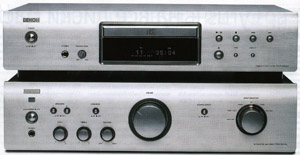